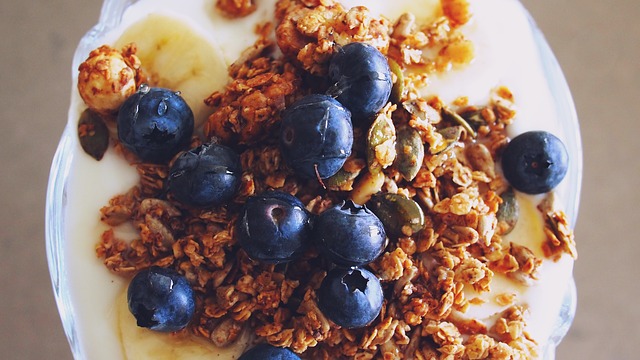 Are you bored of your morning cereal and oatmeal options? Looking for a nutritious and protein-packed alternative? You can’t go wrong with our roasted blueberry and vanilla quinoa bowl! The quinoa will hold your hunger pains at bay into the afternoon, so no worries about needing an early lunch or snack. Plus between the mix of vanilla, cinnamon, and blueberries, these fall flavors will have you craving this yummy quinoa any time of day!

What Goes Into It

You can also add anything else you’d like as a topping to your quinoa. Some of our favorites include slivered almonds, chia seeds, carob pieces, an extra sprinkle of sea salt, and even coconut flakes!

How To Make It

Start by preheating your oven to 400 degrees F.

In a saucepan, mix the water, quinoa, vanilla, and bit of sea salt. Bring this mixture to a boil, then cover it and decrease the heat to low.

Let the quinoa simmer for about 15 minutes or until all of the liquid as been absorbed.

Top your quinoa with the roasted blueberries and even a few fresh blueberries if you desire! Add any more additional toppings to taste and enjoy!